Shri Conclave on the 10th of July marked the culmination of the 25-year celebration of The Shri Ram School.  Attended by students of classes 9 to 12 from both M 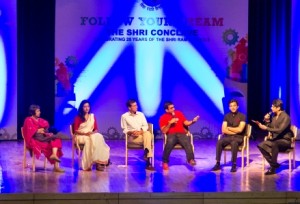 oulsari and Aravali campuses attending in full strength the same event together, Shri Conclave had the audience seated in The Manju Bharat Ram Hall at Aravali spellbound as panellists spoke on ‘Follow Your Dreams’.  Addressing the audience was an eclectic group of speakers, one of whom was  Mr. Ashish Dhawan, CEO Central Square Foundation and recipient of the award of NextGen Leader in Philanthropy by Forbes India, now working towards excellence in education and promoting social entrepreneurship after a successful career in investment banking.  Ms. Barkha Dutt, Group Editor NDTV and Padma Shri awardee, also spoke of her experiences.  Chef Vikas Khanna, Masterchef India, Michelin starred chef, guest on MasterChef Australia and the popular ever gracious judge on MasterChef India had the audience in splits and awe-struck as he recounted stories from his life and expressed his beliefs.  Marathoner, entrepreneur, sports and fitness enthusiast, foodie, founder India Games and now CEO GOQiiLife, Mr Vishal Gondal had students and faculty alike listening to his wisdom on changing situations.  Eminent Supreme Court advocate who litigates for human and gender rights, and UN adviser Ms Karuna Nundy began the conclave with her address.  The conclave was moderated by Mr. Rajiv Makhni of Gadget Guru and Cell Guru fame. At the end, the panel answered questions posed by students.

At The Shri Ram School's, Moulsari campus, the growing adolescents are encouraged to explore their abilities and talents and stretch their horizons.

At the Shri Ram School's Aravali campus you walk into the bright, airy, cheerful classrooms of the junior and the senior wings, greeted by art and craft work of the children and teachers.

The Shri Ram Police Public School , set up jointly by SRF Foundation and the Haryana Police Department, is committed to the same mission, values and educational ethos of the parent school.